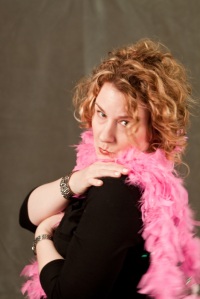 Improv discovered Allison when working as a Roadie for a bluegrass band.  She wanted to promote the tambourine player.  “Well, there really is a shortage of good tambourine players.”  She pleaded her case.  The band said no-way.  “I get no respect!,” she screamed.  It was the worst Rodney Dangerfield impression ever.  The band said go home.  On her way she stopped off at a comedy club in Sioux Falls, volunteered for one of the games and caught Improv-itis.  The only known cure is more improv.  She joined Monterey iMPRoV.  Oh, and that tambourine player?  He gave up tambourining and became the band’s Roadie.  As for Allison?  She’s getting lots of respect.